Dance is a central part of the creative industries in the UK. If you look at numbers alone, at £92 billion per year its contribution to the economy is far from negligible.

Beyond that, though, dance is generally accepted to have a key role to play in education; and the prestige of British dance companies abroad, reinforced by regular touring, is important to burnish the UK’s international image.

Furthermore, dance in the UK attracts top international talent, be it to train at prestigious fee-paying institutions, such as The Royal Ballet School, English National Ballet School, or Rambert School, to mention but a few, or to contribute diverse performing and choreographic talent, views and approaches to the cultural melting pot.

All that, however, is at risk after Brexit, according to a report just published by OneDanceUK, the organisation formed to support the dance sector and be its collective voice. 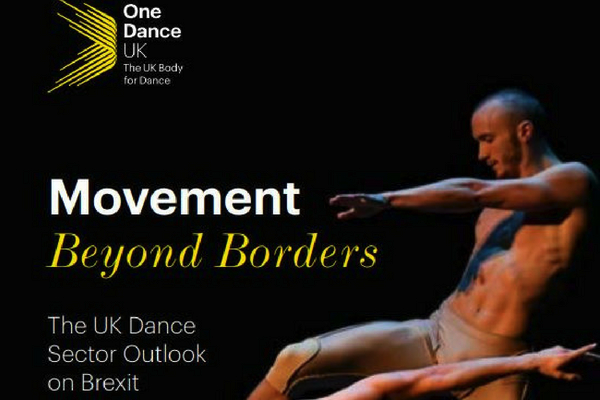 Movement Beyond Borders is the result of extensive conversations within the dance sector, which started soon after the EU referendum of June 2016 and culminated in a comprehensive survey circulated to companies that range from the established big beasts of the sector to small independent outfits.

The prospect of Brexit, even before it becomes reality in March 2019, is already having a profoundly destabilising impact across the sector, as Hanna Madalska-Gayer, OneDanceUK’s Advocacy Manager and one of the survey’s compilers, told Ballet Position.

“The main thing that’s coming across is the lack of certainty around what the arrangements will be post-Brexit. That lack of certainty is making it very difficult for individuals and organisations to do much planning now.”

To get a full picture of the UK dance sector’s deep integration with continental Europe it helps to look at some of the facts and figures pointed up in Movement Beyond Borders:

– at present, dance in the UK benefits from EU funding through programmes such as Creative Europe, Horizon 2020 and Erasmus +. There is no alternative UK source to fill the gap, should these inputs cease after Brexit;

– the average proportion of nationals from the EEA (European Economic Area, which includes the EU and non-member countries with reciprocal arrangements) employed as performers and creative/artistic staff across large scale dance companies is 25 – 33%. This rises significantly in the case of small companies;

– touring is a considerable income generator for UK dance companies. At the moment, touring in
most of the EEA is relatively easy, because sets and costumes can travel by road with no need for customs clearance.

Not surprisingly, then, the most damaging impact of Brexit would be if freedom of movement across EU borders were to cease, says Hanna Madalska-Gayer.

“The most important for our sector is the ease of movement for people and objects. I think that’s the one that not only we at OneDanceUK, but many other industries in the country are worried about.”

Brexit – The End of Free Movement?

Under current rules, EU nationals can reside and work freely in member countries.  They can travel visa free throughout the EEA. Should these provisions be terminated after Brexit, companies would be faced with escalating costs and bureaucracy. As Tamara Rojo, herself a Spanish national and currently Artistic Director of English National Ballet, told the survey:

“The dance world relies on free movement of creatives (…) we don’t have the resources to deal with hundreds more visas each year.”

Movement Beyond Borders estimates that an end to ease of movement could result in increased costs of more than £130,000 per year for some major UK dance companies, amounting up to 10% of turnover.

Consequently, the overwhelming majority of survey participants (86%) told the survey “Brexit will affect their UK-based work and productions (…) by reducing their ability to bring artists and organisations into this country.”

Movement Beyond Borders found that practically all of its respondents felt an end to free movement would also adversely affect touring, with new visa and customs requirements adding costs and delays to the whole process.

The same constraints would apply to European companies performing in the UK, where dance audiences have become used to seeing the best from continental Europe, be it Nederlands Dance Theater or Tanztheater Wuppertal Pina Bausch, to mention but a small fraction of the artists that make up the bulk of programming for Sadler’s Wells, for example.

Konzept Arts and Ideas is a new performing arts management company, with offices in London, Turin and Berlin. Its producer, Natalie Richardson, told Movement Beyond Borders:

“I think we will see a stultifying and isolating trend in the artistic work that becomes too inward looking.”

Movement Without Borders provides the first official, wide-ranging assessment of the possible impact of Brexit on a key sector of the UK’s cultural life, and contains a number of recommendations to mitigate its effects.

Among them, “we urge Government to ensure a quick, easy and either no or low-cost, long-duration, multi-entry visa or work permit arrangement for creative and cultural workers, to ensure continued ease of movement for people and objects;’

and, “reciprocal arrangements must be put in place to enable cultural exchange without increased bureaucracy or cost to organisations touring in Europe, internationally or the UK.”

Hanna Mandalska-Gayer says that Movement Beyond Borders is one of the key tools for OneDanceUK in its ongoing contacts with government departments and individual politicians:

“The report was sent while it was still in its interim version, before it was properly published, to the Department for Culture [Media and Sport] and others, so they will have seen a lot of the content.

“We’re also over time sharing a lot of its content with policy makers as and when they need it; (…) and it has been shared with MPs and peers.

“We actually have a meeting of the all-party parliamentary dance group – OneDanceUK actually manages the secretariat for this group – and we’ll be meeting on the 11th September and we’ll be sharing the report with them as well.”

Like so much of what surrounds Brexit and its terms, it’s hard to tell where, if anywhere, such efforts will lead. One thing is certain, though: as Movement Beyond Borders makes clear, “when making creative work, it’s all about finding the right person for the right role – no matter where they are from.”

Curtailing ways of “finding the right person for the right role” will inevitably lead to an impoverishment of the work, with all its deleterious implications for the health of cultural life as a whole in the UK.