Susan Robinson, ballet teacher extraordinaire, on how she transmits her “pure passion for the art” to successive generations of dancers.

On the last night of English National Ballet’s London Christmas season, Laurretta Summerscales received a rapturous ovation for her sparkling portrayal of the slave girl Medora, a lead role, in Le Corsaire.

Better was to yet come, when the ENB’s Artistic Director strode onto the stage, microphone in hand, to make a very special announcement: Laurretta Summerscales was being promoted to company principal with immediate effect.

The news was received with jubilation in the London Coliseum and beyond, perhaps nowhere more so than in a quiet corner of leafy Surrey, in the home of Laurretta’s first ballet teacher, Susan Robinson.

“She was driven,” Susan recalls of the young Laurretta, who started coming to her school as a six-year-old.

“We used to have an exercise, eight sautés, and it had to be in canon in fours. She was not a jumper, and she got her knickers in a twist about this. But later her mother told me at three in the morning she went into her parents’ bedroom and said, ‘I can do it now.’”

This “passion for the art” is what Susan looks for when children first come to her. That and, of course, musicality, “being at ease with the music.”

Lauretta again: “In her first class one of my pianists said, ‘oh, she’s very musical this little girl.’”

We talked in her cosy living room in Byfleet early one Friday afternoon, before she started a full schedule of classes in the Methodist Hall, the biggest of her three studios, just a stone’s throw away. 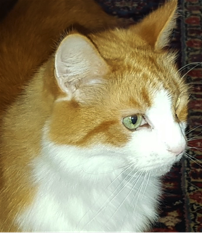 We did so under the watchful eye of Cloughie, her splendid ginger tom, named after the quasi-mythical manager of Nottingham Forest football club, Brian Clough.

Susan is a die-hard Forest fan and proudly points to the club shirt she’s wearing.

Teaching came to her almost by accident, when her dancing career in Germany was cut short for family reasons.  Back in Britain, a tentative start as a freelance teacher awakened a semi-hidden vocation.

“I received quite a few compliments and I thought, “well, I think I can do this.”

Just to make sure, she consulted Barbara Fewster, whom she describes as “an amazing teacher,” whose opinion she absolutely respected.

“She said to me, ‘go and find a place where there isn’t any recognised ballet school, and maybe you’ll find some stars for us.’  But she said, ‘I doubt it, because talent is very very rare.’”

So Susan Robinson found a niche in Byfleet, where just over 40 years ago she started her school with two students and now has around 280 in what’s widely acknowledged as one of the top non-vocational schools in the UK.

That she is a natural teacher became absolutely clear as I watched her first class of the day for six and seven-year-olds. 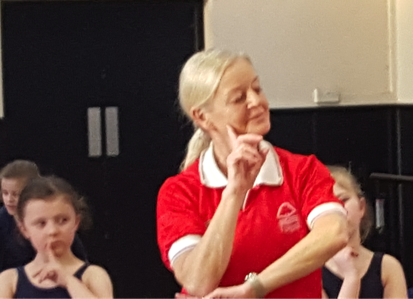 “There’s a right way of doing it and there’s a wrong way. Just the small things: making sure their hair is in a bun, making sure that they’re not scruffy…There’s a rule and we’ll have fun, but you don’t step over that because otherwise what’s the point?”

She feels it’s important, too, that beyond learning the technique children are able to express themselves and acquire a feel for the stage.

“My idea is that they come off the streets, we try to give them a sense of performance – we have a biennial show, and I do take a small performing group and we do lots of charity work; and so the children have the opportunity of me putting up a cameo role that suits their personality, brings out their best and gives them the confidence.”

Class was a mixture of fun and discipline, and her 14 little pupils were engrossed throughout.

She teaches the standard syllabus; but beyond that, “when they are eight or nine I yank them out for another class which is non-syllabus and it’s my idea of what training a classical dancer needs to be”

It works. Nowadays, when visiting companies need children for productions in London they come to the Susan Robinson School.

It’s been like that since the time, many years ago now, when Moscow’s Bolshoi first came calling:

“They wanted an open audition for children to be in The Sleeping Beauty, and we went up to the old Studio Centre and the Russian Ballet Mistress was there. Our school uniform is navy blue with a pink belt, and I think it was my proudest moment when she said, ‘if you do not have navy blue leotard with a pink belt, please leave.’”

She laughs with pure pleasure. And adds: “so, we had 12 dancers in and of those four went on to become professional dancers.”

Students leave the Susan Robinson school at 16, and if they want to pursue a dancing career must then enrol in a vocational establishment.

The roll call of her alumni dancing professionally is impressive indeed.

With the school offering jazz, tap and contemporary dance classes as well as classical ballet, the students’ options  are quite open.

Susan Robinson alumna Natalie Dodd – “she’s a very tall girl, beautiful!” – has just joined the Mark Bruce Company as an apprentice and is dancing in its high octane The Odyssey, currently touring the UK.

Hannah Bateman, another “old girl,” is a Leading Soloist with Northern Ballet – but only because she had the grit and determination Susan so admires.

“Hannah was in a state school and they interviewed her for a future career and she said, ‘I want to be a ballet dancer.’ And they said, ‘oh don’t be ridiculous, Hannah, we think you’re quite handy with your hands, perhaps you could be a plumber.’”

She still laughs heartily at the memory. In fact, Susan Robinson laughs often, be it for sheer joy or simple mischief.

She keeps an iron grip on her school, her life’s work. She trains her own teachers: “they’re old girls.”

When I visited, Hope Roberts was going through the first stages of her training with “Miss Susan,” which she will complement with a recognised teacher’s training diploma.

Hope trod the boards with the Bolshoi as one of the child extras in the Russian company’s The Sleeping Beauty, but decided teaching was her calling.

Obviously, not all of Susan Robinson’s pupils go on to become dancers or teachers. Still,

“I always say, if you never dance a step, it’s not wasted, because you’ve been with like-minded girls and boys, you come through puberty in a very healthy way and just get on with life. And I think the camaraderie that the girls have, the friendship they’ve spawned, they’ve kept.

“I like that about them, because they’re nice human beings and it really matters not whether they danced or not. With us here they did dance, and they danced with joy.”

Susan Robinson personifies the joy of teaching. She has a second studio next to the Methodist Hall, and as well she had a smaller one build in her own back yard, in what was once a garage and subsequently a vegetable patch.

“When I’m in my 80s perhaps I’ll be able to take a private lesson or coaching here and dodder around on a stick.”

Perhaps; but at the end of an inspiring afternoon, the image of Susan Robinson doddering around on a stick is really quite impossible to conjure up…